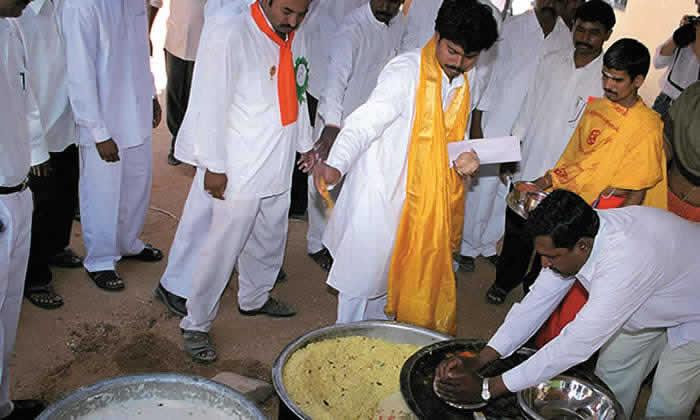 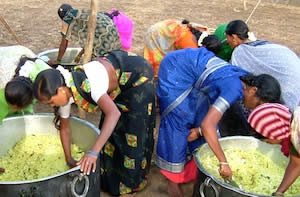 The bottom line is Anam Parabrahmam. It means, the whole Brahma Consciousness is hidden in the food. Helping, plus all the giving nature is on one side, and feeding others is on the other side. It balances.

If I give you a beautiful sari, next time you’ll expect another one. But the food, after you eat it, no, it’s done. That’s why from the beginning, even when many people brought a lot of prasad to Baba, he didn’t like that. He had to go into the village, to each house to receive some roti, or day-old food, plus fresh food that he mixed in his bowl. He mixed everything together. He ate and kept throwing some to the dogs and animals around.
Sri Kaleshwar 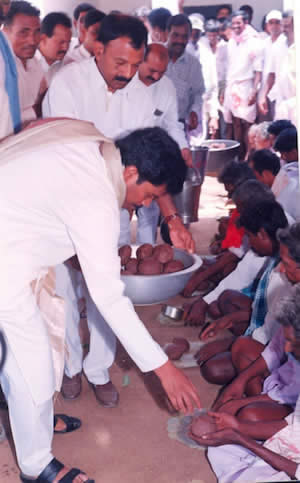 Providing food during an eight year continous drought, Shirdi Sai Global Trust (SSGT) directly provided two meals daily for farmers and villagers for several months. When crop failure due to the lack of rain and ground water levels dried up, desperation and starvation increased dramatically. In the state of Andhra Pradesh, farmer suicides from crop loss was at its highest in recorded history.

Since then, SSGT planned a longer term vision of addressing accute situations, by stockpiling large amounts of basic commodities of rice and protien rich dahl legume. Often these staple items are prepared and distributed to areas where there are accute unexpected shortages. 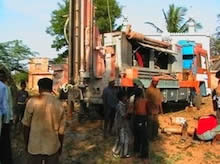 The bottom line is Anam Parabrahmam. It means, the whole Brahma Consciousness is hidden in the food. Helping, plus all the giving nature is on one side, and feeding others is on the other side. It balances.

For example, suppose you’re hungry. If I feed you and you eat until you are full, if I want to give you some more, you say, No thank you, I can’t.

For the past eight years the state of Andhra Pradesh has been in a perpetual drought. Hundreds of villages and small towns do not even have local water wells, leaving those to walk many kilometers to fill water jugs for drinking & cooking purposes. In response to this lack of proper water, SSGT has spent extensive development and financial assistance to provide borewells as deep as 500 ft in areas where there was no water source. Without water, communities cannot survive and farmers cannot plant crops for food.

Since 2004 the Trust has not only provided borewells for irrigation, but has provided water filtration units that purify and remove hazardous levels of flouride and other harmful contaminents, making it safe for villages to drink and cook. 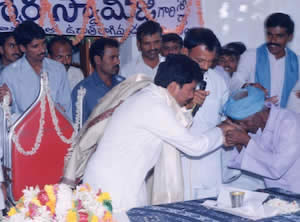 For the past several years, during the period of Christmas thru New Years, Sri Kaleshwar and the Trust members have donated sweets and food to over 15 villages, totaling over 300,000 people. Tractors travel many kilometers distributing packets of food, reaching out to these romote locations in a true spirit of holiday giving.