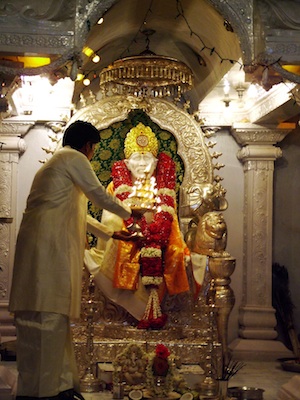 Shirdi Baba, Jesus, Ramakrishna Paramahamsa, Ramana Maharshi and Sri Kaleshwar are part of the Divine Lineage. Sri Kaleshwar says we all need the help of divine souls to find God. “How to suck cosmic energy? That’s called the God energy. We can easily suck cosmic energy. It has to be through some holy persons. We can’t handle that cosmic energy directly. Through some holy person, maybe Jesus, Shirdi Baba, any Ma, any Baba, any Swami, any holy man, any holy soul. It’s through them. First we have to be able to receive their energy—to taste. When you are ready to taste their energy, then that energy makes you to connect to the cosmic. Without tasting the love from the master, from the holy man, from any traditional strong soul man…if you can’t get love from him, if you can’t receive the energy from him, if your heart is closed to such type of people, there is no chance––you can’t suck the cosmic energy. You can’t connect to the universe. You can’t connect to the Creation of nature. We have to understand––we’re just a small peanut in the biggest, huge God Creation. In the incredible Creation, we are just a small, small nut.” 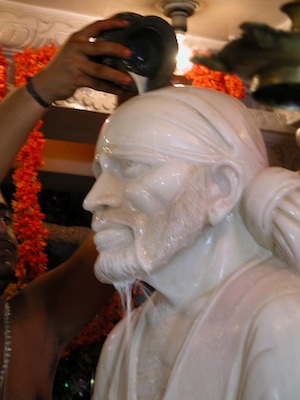 Shirdi Baba lived his entire life as a beggar, begging alms from the villagers in the tiny backwater town of Shirdi. His simple outward appearance disguised the truth of his spiritual stature. He lived most of his life in a tiny dilapidated mosque with no protection from the heat, rain, and the multitudes who sought relief from their problems and suffering. He chose to live as a beggar, although he could have lived like a king. He received millions of rupees from his devotees but each day he was left empty handed because he had distributed it all to the poor.

Baba was an incarnation of Shiva, and a rare yogi with the highest supernatural capabilities. His yogic feats were endless; he changed water into oil, appeared in many places at once, rescued countless devotees from life-threatening situations, and in his ultimate act of sacrifice, gave up his life to save the life of a beloved devotee. He demonstrated so many miracles throughout his life. This phenomenon continues to this day.

All Human Beings are One. Our religion is humanity.
Shirdi Baba

Devotion to him is rapidly growing throughout the world among people of all faiths. His life was a demonstration of the unity of all religions and our essential oneness. Although he lived in a mosque, Hindu prayers and rituals were performed. People wondered if he was a Hindu or a Muslim. “So Baba told them one statement, Sri Kaleshwar says, ‘All human beings are one. Our religion is humanity.’ Baba said he was neither Muslim nor Hindu; he was everything. Whoever calls for his help, his protection is there. Who really follows Baba, fear can never touch them. Fear is always away from them. They’re very happy whatever happens. ‘That’s fine. Great. Lovely.’ Like that. Totally surrendered.”

Before leaving his body, Shirdi Baba made a promise to the world that whoever calls on him with faith, he will respond, “I will never forsake anyone who relies on me.” 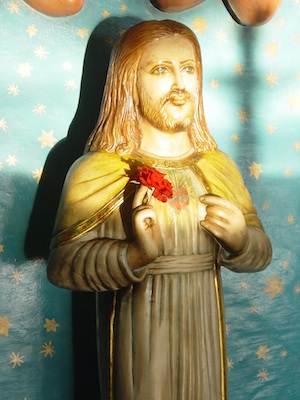 Sri Kaleshwar says, “Jesus is the man of huge love; that love is incredible. With your heart just if you start to make a flame, the love flame––that flame, taking it day-by-day, day-by-day––is getting bigger, huge. When it starts to get huge, you can command on Jesus very, very easily. You can’t command on Jesus with your willpower, like dominating, you can’t do anything like that. Through only the love, you have to pull him. No mantras, no yantras, nothing will work in front of him. Only with your open heart and love, you have to pull him, “Please, please.”

Love each other as I have loved you.
Jesus

Jesus, even though he was dying, he had incredible powers in his hands. I can say he’s a God. But he never said he was a God. He could do wonders. He never used his powers for himself. He was always thinking for others, “How can I help him? What can I help him with?” He never cursed anybody from his mouth, even if somebody was screaming on him, just simply his answer was––smiling. Simply loving them, simply accepting whatever energy they were throwing on him.”

“Jesus knew the God power. That same God gave tests. But Jesus did not command on God. Jesus wasn’t angry with the people. He never used his power for selfishness. Simply his heart was open and smiling and accepting. That is why he became the highest, most powerful master in the universe. No master sacrificed and surrendered the way Jesus did. Jesus came to India. When he was in a very early age, he came to India to research on God. He traveled almost all India. Studied means he had conversations with many, many different saints in India. Finally, he got power in India.” 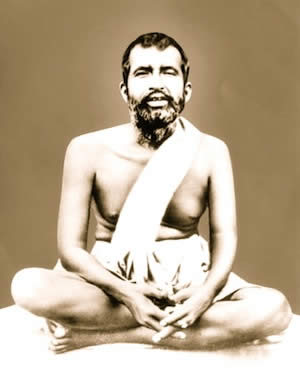 A formal portrait of the great saint Ramakrishna Paramahamsa

All religions lead to the same goal.
Ramakrishna Paramahamsa

His life was categorized by his fervent devotion to Mother Divine, Mahakali. Sri Kaleshwar says that Ramakrishna longed to see the Mother for many years. But none of the spiritual practices brought him to that experience. He had driven himself to the point of suicide because of the unfulfilled desire to see the Mother. Finally, a female saint initiated him into the practices of this lineage through which he was able to have the fulfillment of his deepest spiritual desire. He had a direct experience of the Mother after which he saw Her every day. The practices he used to see Mother Divine and realize Her are the practices that Sri Kaleshwar currently teaches in Penukonda. He says that a true spiritual path must give a direct experience of the divine. You must see what cannot be seen with your two eyes. This is the goal of the practices revealed by the Divine Lineage. 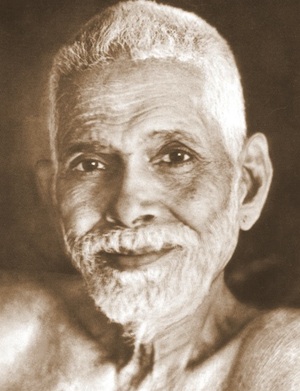 At the age of sixteen Ramana Maharshi experienced a profound spiritual awakening after experiencing the nature of death. After this, he left his home and family drawn to the sacred mountain Arunachala in southern India, where he lived for the rest of his life. His only possessions were a piece of cloth and a walking stick.

Silence is ever-speaking; it is a perennial flow of language; it is interrupted by speaking. These words obstruct that mute language.
Ramana Maharshi

Little by little word spread about the ‘sage of Arunachala’ and many came to sit in his presence. He seldom spoke. But occasionally he would respond to questions. When he said, “Be still and know that I am God,” it wasn’t a suggestion. "Silence is essential to knowing and becoming consciously one with God––All that is, ever has been, ever will be.”

Sri Kaleshwar has a unique relationship and connection to Ramana Maharshi and Ramakrishna Paramahamsa. He says the three of them are soul brothers and have supported each other’s work throughout countless lifetimes.